We specialise in Hornet
control & removal

The UK is home to only 1 native species of hornet, the European Hornet. A considerably larger insect than the wasp or bee, the presence of a hornet can strike fear into unsuspecting members of the public.

Hornets can be very defensive around nests and aggressive around food sources delivering a painful sting if necessary though will usually avoid conflict. As an omnivorous species, they feed heavily on beetles, wasps and large moths among others however are partial to fallen fruit and other sugary foods.

In recent times, Asian hornets have made their way into the UK. The Asian predatory wasp was first identified in the UK in 2016 in the Tetbury area of Gloucester and further sightings were made in 2017 and 2018. These invasive insects predate heavily on honey bees and other pollinator insects causing a significant threat to bee colonies among other native species. They are most likely to be seen around a beehive attacking and eating bees defending the hive. If you see an Asian hornet, DO NOT attempt to disturb an active nest. The sighting should be reported to the Non-Native Species Secretariat with a photograph and location details. This can be done through the Asian Hornet Watch app, through an online form or emailed to the Non-Native Species Secretariat. Further information on the Asian hornet can be found on the NNSS website. 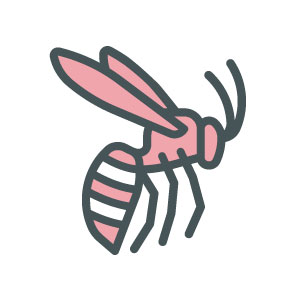