We specialise in bird
control & removal

Information: Under the Wildlife and Countryside Act 1981, birds can only be killed under licenses issued by Natural England. To kill a bird without a legitimate reason is an offence. Call us FREE on 0800 592011

It is important to carry out bird control as pest birds, including Feral pigeons can become a serious problem when they decide to make your premises their home or roost.

​Birds can transmit diseases to humans including salmonellosis and ornithosis but to mention a few, Birds also cause structural damage to buildings as their droppings are corrosive to masonry and paintwork as well as being a slip hazard on the floor below.

How am I affected?

Bird droppings and related debris can be hazardous and as such should only be cleared and cleaned by trained persons.

ASW offers FREE surveys to determine the extent of infestation and the most appropriate method of bird control. Contact our office 0800 592 011 for details of our pest control services.

The feral pigeon is a widespread bird across the UK with flocks ranging from 50 to in excess of 400 birds. They can cause severe damage and risk to buildings and structures with their nesting and fouling which can also become a risk to public health and safety.

These birds are still protected under the Wildlife & Countryside Act 1981 though can be controlled under the terms of the General Licences issued by DEFRA.

They are known to carry a broad range of pathogens and diseases, which can be transferred to humans through air-borne, food-borne and physical contact as well as a host of insects and mites. 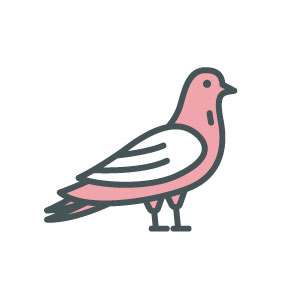